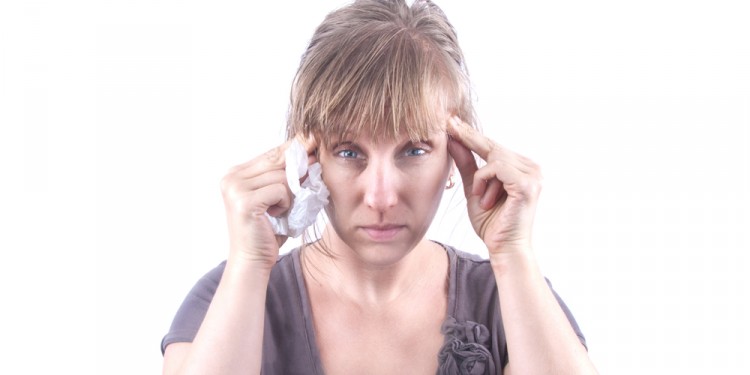 If you’ve suffered a sinus infection, you probably want to do whatever you can to avoid suffering from it again. Symptoms are worse than those of a cold, and often make it difficult to go to work or complete your usual daily activities.

When you do feel that telltale stuffed nose and headache, though, it can be confusing as to what you should do. Is it best to go to the doctor right away, or should you wait? We’re being advised to avoid antibiotics if necessary to try to cut back on bugs that are resistant to them, but sometimes if you wait the infection will only get worse.

Here are some guidelines to help you make the best choices for yourself and your family this cold and flu season.

What is a Sinus Infection?

If you have a sinus infection, it means that your sinuses are under attack from bacteria or viral invaders, and sometimes even a fungal irritant. Bacterial infections respond best to antibiotics.

It can be confusing, though, because an infection, the common cold, or even allergies can cause your sinuses can become inflamed (called sinusitis). How do you know which is which?

A common cold can create similar symptoms to a sinus infection, but usually on a milder scale. You can still get stuffed up and have a colored nasal discharge, but typically symptoms start to improve after about the fifth day or so. Allergies are usually related to certain triggers—you’ll experience symptoms while in your dusty office, for example, but not while on the commute home.

With a true sinus infection, the symptoms are usually worse, more consistent, and often involve moderate to severe headaches behind and around the eyes. You’ll also suffer for 10 days or longer without getting better. You’ll probably suffer other symptoms as well, including weakness, fatigue, cough, fever, and swollen lymph nodes.

A sinus infection can develop after you have a cold or in response to allergy symptoms, as these irritations make the nasal passages more vulnerable to bacterial attack. If you’re someone who is prone to allergies or asthma, you are at a higher risk for sinus infection in general than those who don’t suffer from allergies.

How Should We Treat Sinus Infections?

Used to be that if you went to the doctor and she determined you had a sinus infection, she prescribed antibiotics for you. But new research has called that practice into question.

Used to be that if you went to the doctor and she determined you had a sinus infection, she prescribed antibiotics for you. But new research has called that practice into question.

In a 2012 study, for example, researchers treated 166 adults suffering from sinus infections with either amoxicillin or a placebo. They found no difference in symptoms at day 3, though those on the antibiotics did report better symptom improvement at day 7. The differences disappeared again at day 10, with both groups reporting their symptoms either very much improved or cured.

The Infectious Diseases Society of American (IDSA) also released guidelines in 2012 stating that the vast majority of sinus infections are caused by viruses, which are unaffected by antibiotics. They concluded that sinus infections should not be treated with antibiotics.

“There is no simple test that will easily and quickly determine whether a sinus infection is viral or bacterial,” stated Anthony W. Chow, M.D., chair of the guidelines panel, “so many physicians prescribe antibiotics ‘just in case.’ However, if the infection turns out to be viral—as most are—the antibiotics won’t help and in fact can cause harm by increasing antibiotics resistance, exposing patients to drug side effects unnecessarily and adding cost.”

Still, tell a lady while she’s in the midst of suffering that she can’t at least try the pills and you may risk being told just where you can put it.

What can women do instead to find relief of all the misery?

10 Natural Treatments to Relieve the Symptoms of a Sinus Infection

Women suffering from an infection for ten days or longer should still check with their doctors just to be sure there isn’t something else going on. If you’d like to try antibiotics, and your doctor agrees, you can even go ahead and take the prescription, but you may want to wait a few days to fill it, just to see if you get better on your own.

Women suffering from an infection for ten days or longer should still check with their doctors just to be sure there isn’t something else going on.

The IDSA does recommend, however, that if symptoms last for 10 days or more, are severe (with a fever 102 or higher, or facial pain lasting 3-4 days in a row), or symptoms come back after getting better, than the infection is most likely caused by bacteria and should be treated with antibiotics.

Whatever you decide, relief will likely be your primary goal. Below are ten natural remedies you can try to reduce your symptoms and help you to get through the time it takes to heal.

But first, a few basics:

You may not have thought about this one, but there is some evidence that a massage can help promote draining and alleviate congestion. You can do it yourself, or ask a loved one to help.

Begin in the middle between your eyes, and move outward in small circles to the forehead and then the temples. Come down to the sides of the nose, and then work your way out to the cheeks and ears.

Nasal saline washes and rinses help clear all that gunk out of your sinuses so you can breathe again. They can also help to relieve swelling and pain. You can purchase a saline solution at the drug store, but you can also make it yourself by mixing one teaspoon of salt with two cups of warm, distilled water. (Avoid tap water as there is a small risk it could contain contaminants.) Some women also like adding in a teaspoon of baking soda to buffer the solution and make it more comfortable.

To apply, you can lean over the sink, pour some of the solution in your hand and inhale it one nostril at a time, but most people find it easier to use a Neti pot. Tilt your head to the side and pour the salt water into the upper nostril while breathing through the mouth. Allow the rinse to flow out the lower nostril. Perform the treatment several times a day, as needed.

A number of essential oils have natural antibacterial and anti-inflammatory effects. A study published in the late 1990s, for example, reported that myrtol (an essential oil derived from pine, lime, and Eucalyptus globulus) were superior to placebo in relieving symptoms of sinusitis.

You can use essential oils in a number of ways to get relief. Try a couple drops of peppermint or eucalyptus in your humidifier to open up nasal passageways, or simply simmer these on the stove in a pan of water and breathe in the steam. Tea tree oil is also a really good one to add to a steam treatment as it helps kill bacteria and has shown to be effective in respiratory ailments.

Some other good ones to use in your own combinations include cinnamon, cloves, rosemary, oregano, lavender, and thyme. In addition to breathing them in, you can also try applying them to the skin around the nose. Just be sure to combine them with a carrier oil first, like sweet almond, sunflower, and olive oils, to avoid skin irritation.

Your grandmother’s trick of inhaling steam from a pain of boiled water can be very soothing. The warm, moist air naturally treats dry, sore nasal passages and allows them to drain. A warm water vaporizer or hot bath will also work. Try breathing in the steam 2-4 times a day for about 10 minutes each time.

If you have a good chiropractor, you may want to consider an appointment to help relieve the symptoms of sinus infection. Manipulation of the neck and upper back can help open up the sinuses, and may boost the immune system.

These are micronutrients in food that have health benefits—and some can help reduce that discharge you’re suffering with. A 2010 study, for example, found that certain dietary polyphenols actually inhibited mucus secretion. These included epigallocatechin gallate (EGCG—the polyphenol found in green tea), curcumin (from turmeric), gingerol (from ginger), and quercetin (found in red wine, tea, onions, and other leafy green veggies).

You can get more of these buy consuming the foods they come from, or through supplements. Just be sure that any supplements you use come from a quality source. 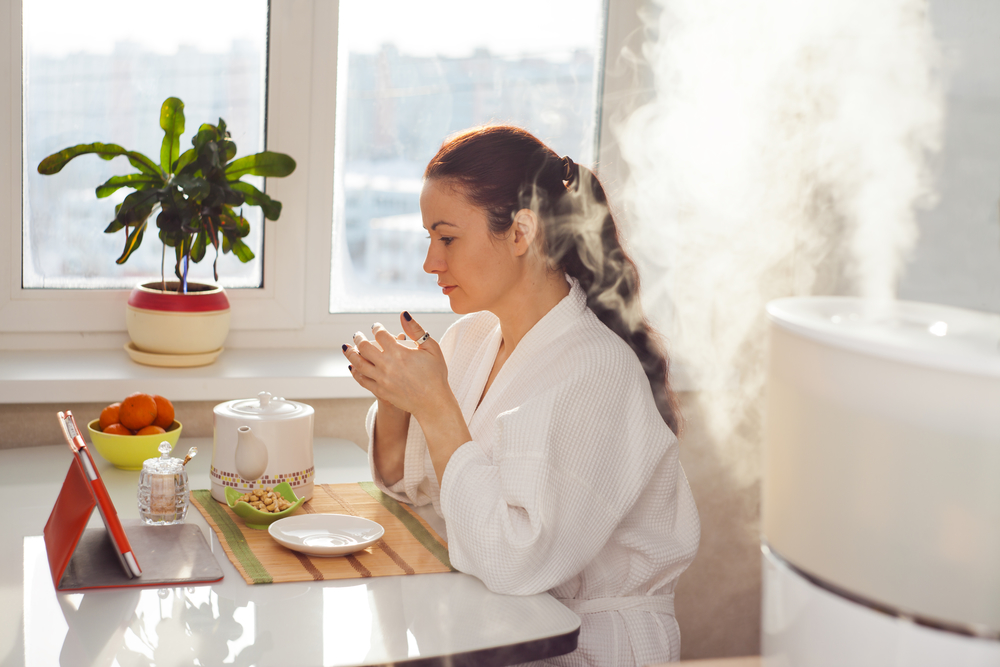 Cold, dry air makes sinus symptoms much worse. Use a humidifier, particularly in your bedroom overnight, to moisten the air and relieve congestion. You may also want to use some pillows to slightly prop up your head. Using a humidifier in the room in which you spend most of the day can also help thin mucus and improve drainage.

Turns out this old home remedy really does help. Not only does the hot steam relieve congestion, but there seems to be something about the soup itself that relieves congestion, improves symptoms, and helps prevent additional invaders from entering the nasal passages. A 2000 study also suggested that the soup could have anti-inflammatory effects.

A number of common spices have natural anti-inflammatory properties that may help speed up healing. Ginger, for example, was found in a 2008 study to alleviate inflammation associated with allergic asthma. Garlic also has natural chemicals that can reduce congestion. Other good ones include onions and cayenne pepper. Add all of the above to your cooking more often while you’re trying to heal.

Have you tried herbs to speed up healing? Several of them are potent immune boosters that may help you beat the infection a little sooner. Try supplements including astragalus, eucalyptus, garlic, Echinacea, elderberry, and green tea.

STD Rates are Increasing and Women Have the Most to Lose

Is It My Imagination Or Are My Allergies Getting Worse?