Acne again! Is your pasta to blame? 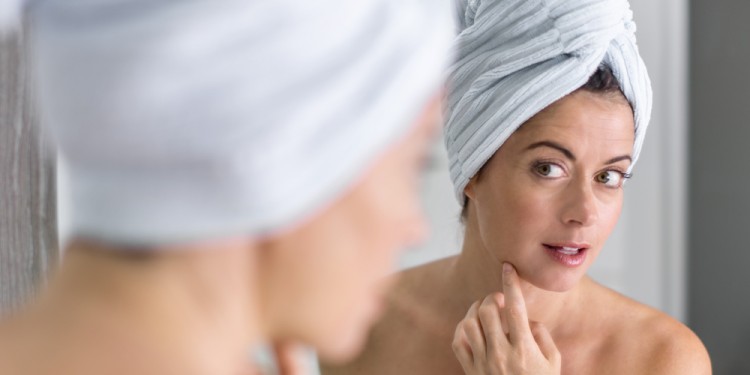 Mean girls, too much homework, and zits that show up at the worst time… these are all things that we long to leave behind in our teenage years. But many women in their 30s, 40s and beyond find themselves experiencing a recurrence of the painful pimples that at one time ruined their life… or at least their Saturday night plans.

Though far from life threatening, acne is no joke. Experts estimate between 40 million and 50 million Americans suffer from acne and its more sinister effects; depression, social anxiety, permanent scarring and poor self-image.

Though far from life threatening, acne is no joke. Experts estimate between 40 million and 50 million Americans suffer from acne and its more sinister effects; depression, social anxiety, permanent scarring and poor self-image.

And though traditionally we associate acne with the adolescent years, a time when hormones are abundant and wildly fluctuating, the American Academy of Dermatology reports that increasingly middle aged women, even those who never suffered from acne during adolescence, are showing up in dermatologists’ offices with cases of severe acne. In fact, the condition in this age group seems to be on the rapid rise.

Common acne, also known as acne vulgaris, is characterized by pimples that can appear on the face, neck and chest as a result of the overproduction of sebum, a waxy substance comprised of fat and epithelial debris produced by the sebaceous glands. The purpose of these glands, often found near hair follicles, is to lubricate and waterproof the skin and hair. In optimal conditions, the hair follicles provide a natural way for the sebum to be released through the associated pores.

Sebaceous glands are stimulated by hormones that become active at puberty, which is why we often associate acne with our adolescent years, when hormones are abundant and wildly fluctuating. This hormonal party prompts the sebaceous glands to begin over-producing sebum which mixes with sloughed off dead skin cells and can get clogged in the hair follicles. Bacteria love these types of dark and dirty conditions, and begins to multiply. This unchecked bacterial growth can eventually cause an infection which brings with it inflammation and pus, a build-up of the white blood cells that have been sent to fight the infection. And that’s the perfect recipe for a pimple of epic proportions.

How is diet connected?

As early as the 1800s scientists had begun making a connection between diet and acne, often citing chocolate, sugar and fat as the worst dietary offenders. But increasingly research is showing that a high glycemic diet could be a trigger for those who are acne-prone.

Dr. Bodemer says a growing body of research suggests that women who are suffering from acne lesions can see great results in adhering to a low glycemic diet.

Dr. Apple Bodemer is a board-certified dermatologist at the University of Madison in Wisconsin. She explains that when you eat foods high on the glycemic index, a scale that ranks how quickly a food is digested and absorbed, your body experiences a spike in insulin and insulin-like growth factor to aid in digestion. These compounds can then in turn stimulate the production of certain hormones. These hormonal spikes and fluctuations can signal oil glands to go into overdrive and can also create inflammatory conditions – two precursors needed for optimal acne conditions.

Dr. Bodemer says a growing body of research suggests that women who are suffering from acne lesions can see great results in adhering to a low glycemic diet. She suggests women educate themselves about the glycemic index score and the glycemic load of the foods they choose to incorporate into their daily diet.

In general a food that ranks 56 or higher on the GI scale is considered to be a high-glycemic index food: white bread ranks at 70, white rice averages a rank of 89, white (Russet) potatoes score a whopping 111. Pre-packaged or boxed foods, anything with white flour, most fruits and even some surprising vegetables (pumpkin and parsnip) all rank high on the GI scale.

However, recently experts have begun utilizing a different method of measurement, the glycemic load, to more accurately measure a particular food’s effect on blood sugar and insulin production. While the glycemic index simply ranks a food on how quickly the carbohydrates in it are converted to sugar, it doesn’t take into account how many carbohydrates are in a serving of a particular food. However, that information is taken into account when considering the glycemic load (GL).

In terms of the glycemic load, a food is considered high if it has a score of 20 or more. And there is less crossover than you might imagine. For example, watermelon is surprisingly high on the glycemic index, ranking as a 72, which means that the particular carbohydrates in watermelon digest rapidly compared to other foods. But, the actual amount of carbohydrates in a serving of watermelon is rather low. Taking this into consideration, watermelon actually has a glycemic load of approximately 4.

Harvard Medical School has an online list comparing the glycemic index and the glycemic load of 100 common foods that can be found here.

Best diet for all your organs

High GI foods are associated with a myriad of other dangerous health conditions such as diabetes, hypertension, hyperglycemia and even certain cancers.

The good news is that by taking measures to consume foods with a lower glycemic load, women can experience many positive health benefits for their entire body, not just their skin. High GI foods are associated with a myriad of other dangerous health conditions such as diabetes, hypertension, hyperglycemia and even certain cancers.

Dr. Bodemer says a good piece of advice is to eat foods “as close to their natural form as possible”. This doesn’t mean that you can’t have pizza, burgers and fries – but they should be enjoyed with the two M’s in mind: moderation and mindfulness. Eggs, legumes, nuts, whole grains, whole fruits, and lots of fresh vegetables should be the mainstay of your diet, she advises. This type of diet, along with exercise, stress-reduction and plenty of water and rest are a woman’s best bet for glowing skin at every age.

Could Women Be Consuming Too Little Salt?

The Science Behind Five Alternative Treatments for Uterine Fibroids