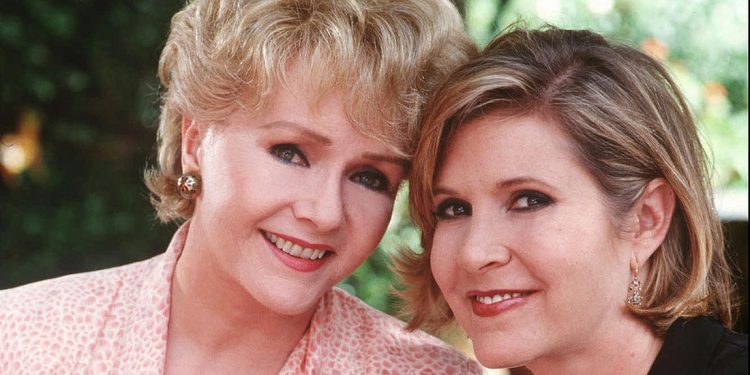 She danced and sang her way into our hearts in Singin’ in the Rain, and went on to win the National Board of Review Best Supporting Actress in 1956 for her role in The Catered Affair. She brought Molly Brown to life in The Unsinkable Molly Brown, for which she received an Academy Award nomination for best actress. She also received more than one Golden Globe nomination and a Tony Award nomination, released a pop music album in 1959, and was a cabaret performer who opened a dance studio in 1979.

However we knew Debbie Reynolds, we knew of her closeness with her daughter, Carrie Fisher, of Star Wars fame. And now we know her as the devoted mom who was so distraught over her daughter’s death that she suffered a stroke and passed away only a day later.

Broken-heart syndrome is more likely to strike women than men. In fact, studies show that it occurs almost exclusively in women.

Can a human being truly die of a broken heart? The cause of death for Reynolds is thought to be a stroke, though at the time of this writing, authorities have yet to release an official diagnosis. She was 84 years old, and had suffered strokes in the past, as well as other health issues, including kidney problems. But her son, Todd Fisher, told USA Today that the stress of Carrie’s death was just too much for his mother.

The question is, could the final stroke have been brought on by Reynold’s grief? Scientists say it’s possible.

What is Broken Heart Syndrome?

The term “tako tsubo” comes from octopus traps of the same name that are pot-shaped. Scientists say that a broken heart consumed by grief can look like a pot. When the heart contracts, the midsection and tip of the left ventricle actually balloon out, while the area above contracts normally. The heart is misshapen to look like a round-bottomed, narrow-necked container—like an octopus trap.

Scientists aren’t sure yet why this happens, but they have a theory. They believe that a surge of stress hormones, caused by a severely stressful event like losing a cherished loved one, can cause a temporary enlargement of the heart with accompanying symptoms similar to a heart attack.

Why would women be more susceptible to this condition? It could be because they have reduced levels of estrogen after menopause, and are thus more vulnerable to hormonal changes.

The hormones trigger changes in the heart muscle cells that stop the left ventricle from contracting like it should. Those who already have heart disease (like Reynolds did), or similar health issues, are likely to be more at risk.

Why would women be more susceptible to this condition? It could be because they have reduced levels of estrogen after menopause, and are thus more vulnerable to hormonal changes. Animal studies have shown that those given estrogen while under stress were less likely to suffer left-ventricle dysfunction.

But we still have more to learn about this syndrome, and how we might prevent it. Currently, it looks just like a heart attack. Victims experience chest pain and shortness of breath, and sometimes irregular heartbeats. Diagnostic tests will also show similar results—changes in blood pressure and heart rhythm, and abnormalities similar to those found with heart attacks.

The difference is that doctors will find no evidence of blood clots, which are the most common cause of heart attacks. What they may find through imaging tests is that abnormal movements in the walls of the left ventricle—that ballooning effect.

How is Broken Heart Syndrome Treated?

The good news is that broken heart syndrome doesn’t need to be deadly. If caught in time, patients can be treated and will most likely recover.

Most important, however, is addressing the underlying grief and related emotions that are causing the problem. With help, victims usually fully recover within weeks.

The condition must be taken seriously, though, because though it’s not the same as a heart attack, it can be just as dangerous. Victims should be rushed to the hospital, and meanwhile, treated like heart attack patients.

Doctors usually recommend treatments similar to those used with heart attack: medications like beta blockers and ACE inhibitors to get blood pressure under control, diuretics (water pills) to improve heart muscle contraction, and aspirin to thin the blood and prevent blood clots.

Most important, however, is addressing the underlying grief and related emotions that are causing the problem. With help, victims usually fully recover within weeks.

Broken-heart syndrome isn’t the only serious condition that can result from severe grief. Extreme stress, such as that which grief brings on, can cause a number of other dangerous, physical symptoms that can lead to stroke, such as that which Reynolds seemed to suffer.

These may include irregular heart rhythms, changes in blood pressure, changes in blood chemistry, and other symptoms that can actually lead to a real heart attack. A 2012 study reported that people losing loved ones are more likely to have heart problems than those not experiencing grief, and that losing a loved one actually increased risk of having a heart attack the next day by 21-fold, and having a heart attack in the following week by six times.

A 2014 study reported that losing a loved one can depress the immune system, leaving the elderly, in particular, more vulnerable to infectious diseases. Other research has shown that the flu vaccine was less effective in those who had lost a loved one in the past year.

Emotional distress is also likely to alter our lifestyles significantly. Women are often unable to eat right or get enough sleep, and sometimes forget to take important medications. They may go for weeks or months foregoing the healthy habits they used to have, causing more stress on their bodies and minds.

What can we do to help prevent ourselves or our loved ones from suffering the worst results of grief?

Experts say there are a number of factors that increase the stress of grief. These include:

Women going through grief are often not in a position to make the best self-care decisions, but if you’re the one experiencing it, perhaps you can remember that the first few days are critical. Try to make sure you’re around others who can help if you need it. In other words, this isn’t the time to be alone. If you experience symptoms of heart attack, call for help immediately.

In addition, try not to overload yourself with “to-dos.” Women are usually the ones to take care of all the details after a loss—the funeral, the obituary, etc. But grieving women need to watch out for themselves, and allow others to help. Postpone any major responsibilities and give yourself space for at least 24 hours after hearing the news.

Scientists add that the best thing women can do is to maintain healthy hearts. Having a healthy lifestyle in general that includes nutritious meals and regular exercise helps create a strong, resilient heart that will be more likely to withstand the stress of loss.

Scientists add that the best thing women can do is to maintain healthy hearts. Having a healthy lifestyle in general that includes nutritious meals and regular exercise helps create a strong, resilient heart that will be more likely to withstand the stress of loss.

If you have a friend or family member suffering from grief, you are in a good position to help. You can watch for symptoms of broken-heart syndrome, and step in to assist with all the arrangements. You can offer practical help, like encouraging the person to eat a meal, or take a walk with you and share her sorrow. You can make an appointment with a therapist, or help your friend find group therapy.

Despite our efforts, sometimes there’s nothing we can do. Debbie Reynolds was rushed to the hospital, but doctors couldn’t save her. Fortunately, statistics show that dying from broken-heart syndrome is rare. As we honor Reynold’s and Fisher’s lives, we can be grateful for the light they brought into our world, and perhaps allow their story to be a cautionary tale:

Ladies, take care of your hearts. You need them to be strong.