YOU ARE HERE:Home » In the News » Do Dietary Supplements Improve Heart Health?
In the News

In a massive new analysis of findings from 277 clinical trials using 24 different interventions, Johns Hopkins Medicine researchers say they have found that almost all vitamin, mineral and other nutrient supplements or diets cannot be linked to longer life or protection from heart disease.

Although they found that most of the supplements or diets were not associated with any harm, the analysis showed possible health benefits only from a low-salt diet, omega-3 fatty acid supplements and possibly folic acid supplements for some people. Researchers also found that supplements combining calcium and vitamin D may in fact be linked to a slightly increased stroke risk.

Results of the analysis were published on July 8 in Annals of Internal Medicine.

Surveys by the Centers for Disease Control and Prevention show that 52% of Americans take a least one vitamin or other dietary/nutritional supplement daily. As a nation, Americans spend $31 billion each year on such over-the-counter products. An increasing number of studies — including this new one from Johns Hopkins — have failed to prove health benefits from most of them. 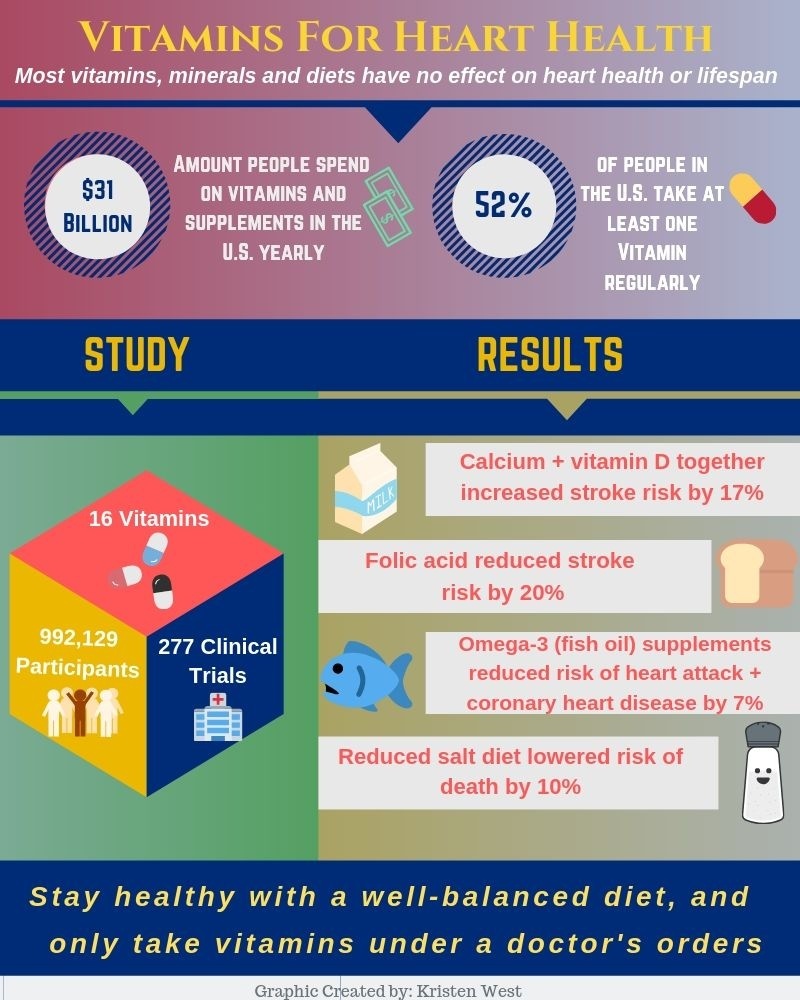 “The panacea or magic bullet that people keep searching for in dietary supplements isn’t there,” says senior author of the study Erin D. Michos, M.D., M.H.S., associate director of preventive cardiology at the Ciccarone Center for the Prevention of Cardiovascular Disease and associate professor of medicine at the Johns Hopkins University School of Medicine. “People should focus on getting their nutrients from a heart-healthy diet, because the data increasingly show that the majority of healthy adults don’t need to take supplements.”

For the current study, the researchers used data from 277 randomized clinical trials that evaluated 16 vitamins or other supplements and eight diets for their association with mortality or heart conditions including coronary heart disease, stroke, and heart attack. All together they included data gathered on 992,129 research participants worldwide.

The majority of the supplements including multivitamins, selenium, vitamin A, vitamin B6, vitamin C, vitamin E, vitamin D alone, calcium alone and iron showed no link to increased or decreased risk of death or heart health.

In the three studies of 3,518 people that looked at a low-salt diet in people with healthy blood pressure, there were 79 deaths. The researchers say that they found a 10% decrease in the risk of death in these people, which they classified as a moderate associated impact.

Of the five studies in which 3,680 participants with high blood pressure were put on a low-salt diet, they found that the risk of death due to heart disease decreased by 33%, as there were 674 heart disease deaths during the study periods. They also classified this intervention as moderate evidence of an impact.

Forty-one studies with 134,034 participants evaluated the possible impact of omega-3 fatty acid supplements. In this group, 10,707 people had events such as a heart attack or stroke indicating heart disease. Overall, these studies suggested that supplement use was linked to an 8 percent reduction in heart attack risk and a 7 percent reduction in coronary heart disease compared to those not on the supplements. The researchers ranked evidence for a beneficial link to this intervention as low.

Based on 25 studies in 25,580 healthy people, data also showed that folic acid was linked to a 20 percent reduced risk of stroke. Some 877 participants had strokes during the trials. The authors graded evidence for a link to beneficial effects as low.

The authors point out that the studies suggesting the greatest impact of folic acid supplementation on reducing stroke risk took place in China, where cereals and grains aren’t fortified with folic acid like they are in the U.S. Thus, they say, this apparent protective effect may not be applicable in regions where most people get enough folic acid in their diet.

Twenty studies evaluated the combination of calcium with vitamin D in a supplement. Of the 42,072 research participants, 3,690 had strokes during the trials, and taken together the researchers say this suggests a 17% increased risk for stroke. The risk evidence was ranked as moderate. There was no evidence that calcium or vitamin D taken alone had any health risks or benefits.

“Our analysis carries a simple message that although there may be some evidence that a few interventions have an impact on death and cardiovascular health, the vast majority of multivitamins, minerals and different types of diets had no measurable effect on survival or cardiovascular disease risk reduction,” says lead author Safi U. Khan, M.D., an assistant professor of Medicine at West Virginia University.

The authors received no financial support for this research study and declare no conflicts of interest.

Materials provided by Johns Hopkins Medicine. Note: Content may be edited for style and length.