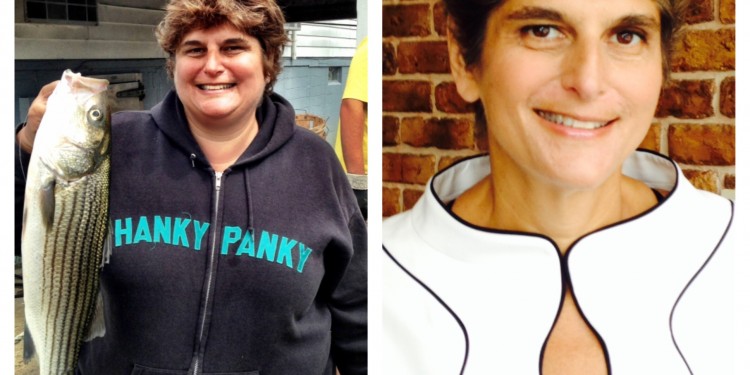 You know what they say about never trusting a skinny chef! Well, after losing 160 pounds in 14 months, this chef is so totally transformed that even best friends and industry regulars don’t recognize her!  And while she knows all about food and nutrition, in the end, it wasn’t exercise — or even a diet — that did it. Find out about the surgery that Hank’s Oyster Bar chef/owner Jaime Leeds says saved her life.

“I’ve always said that [about trusting skinny chefs] all of my life,” laughed Leeds, “because I’ve always rationalized being heavy. I’d say, ‘Well, you’re not supposed to be a skinny chef anyway…’ So I guess now I’ll have to take that back.”

Leeds, chef and owner of a successful group of oyster bar/seafood restaurants in Washington, DC, has been a chef for almost 30 years. She’s also been close to 300 pounds for most of that time.  “Working hard on my feet as a chef, lifting, in the heat, 17 hours a day, 7 days a week… That’s a lot over the years,” she explained.  After developing arthritis in her knees and feet, the successful entrepreneur wasn’t enjoying the fruits of her labor.  Instead, she was existing in a state of pain and depression.

“I couldn’t walk up stairs without holding onto the wall; I couldn’t play with my 11 year old son. I’d just have to go home after work and get horizontal. I didn’t have any kind of social life, and I was in chronic pain. I thought I HAVE to do something about this.”

So she did. And as a chef, first she focused on food. “I tried all-protein diets, no-fat diets, no-carb diets…”  No change. And she exercised through the pain. “I was doing yoga for a while. I like to bike ride… but still it wasn’t enough.”

So when a friend told her about Duodenal Switch (DS) surgery, she took the suggestion seriously.

According to Jennifer Whitlock (RN, MSN, FNP-C)*, the duodenal switch is a type of combined malabsorptive and restrictive weight loss surgery, which is in some ways like a gastric bypass as it decreases the quantity of food that can be accommodated by the stomach, but also decreases the number of calories that can be absorbed and used by the body as food bypasses part of the small intestine.  The surgery claims to allow patients to lose weight without significantly altering their eating habits.

Obviously, there are risks involved with any such surgery. An Annals of Internal Medicine study published in 2011** warned against the procedure, cautioning that duodenal switch surgery may, in fact, help people shed substantially more weight, but that (at that time) it also had nearly double the complication rate [of gastric bypass surgery]. Even so, Leeds said her doctor informed her that she was a good candidate, and though she was “both scared and excited… but mostly scared,” she felt that for her, the benefits outweighed the risks*** — and the cost! (While the expensive surgery can be covered by certain insurance, it was not in Leeds’ case.) “When you’re in chronic pain, it’s like you’re in another world.  For me, at the time, DS was like a shining light: A hope for a better life.”

On the operating table, Leeds’ stomach was cut down to four ounces and her absorption tube was shortened by two-thirds. So while she physically cannot eat as much, (Note: In the months post surgery, a patients’ stomach will stretch back somewhat. Leeds’ stomach is now at its maximum eight ounces.) she also now only absorbs 20% of the vitamins and minerals that she intakes. “I have to take 15 vitamins a day for the rest of my life,” she said.

Months later, she reflects on the experience with nothing but positivity, and finds herself recommending DS for “people who are at their wits end, have not been able to lose the weight, and are in chronic pain.”

“I opted for DS because [my research showed that] it has the best history of keeping the weight off,” she said. “Now, I’m also totally pain free.”  She is no longer on arthritis or depression medication, and her cholesterol and blood pressure have lowered. She gushes about her results: “My life has just taken a ‘180.’ I’m much more social. I’m dating! I’m playing with my son. I have so much more energy… I’m so much more proactive with my business because I feel like my mind is a lot more active now, too. Chronic pain is really debilitating, and I don’t have that limitation anymore.”

Also not limited… her appetite, though she insists that she pays extra attention to her portion size and eating schedule and warns that DS surgery shouldn’t be misused as an easy fix to lose weight without changing bad health habits. “I still taste all of the foods from the chefs in my kitchen,” she laughed, explaining that there’s nothing doctors have told her that she can’t have. “It’s just that my stomach is so small that I have to have a lot of protein, and… I can’t have carbs taking up the room, so I mostly eat a lot of protein and a lot of vegetables.”

Her eating habits have changed, exercising increased, and time with her son enhanced, but there’s one change she’s really having trouble getting used to — shopping! “I still go for the large sizes on the rack,” she said. And if she doesn’t recognize the person she sees staring back at herself in the mirror, she’s not alone. Recently invited to cook at New York’s James Beard House with an elite group of women chefs, she was amazed by close friends’ and colleagues’ react to her transformation. “They just do not recognize me. I say, ‘It’s me, Jaime!’ and they look into my eyes and say, ‘Oh my gosh! It is you. I can’t believe it! You look amazing!”

Leeds insists that this major medical intervention was her only hope of getting the weight off, and wants her story to be an inspiration for people who feel like they have no options left. But she cautions, “You still have to be careful and maintain your health. I am a chef, so food is important to me… I want to eat a lot of different foods, and I want people to eat a lot of my foods, (keep in mind that oysters are high in protein and zinc… and a dozen only have 110 calories!) but…” she wouldn’t wish her chronic pain and depression on anyone.

In short, it’s a surgery****, so there are real risks, but this skinny chef asks you to trust her: “DS is the best thing I’ve ever done.  No question.  I wish I would have done it sooner.”

Read more about this procedure

How to Survive the Unspoken Grief that Comes After Miscarriage

Experiencing Unintended Weight Loss? It Could Be Cancer