Overview: A person with anorexia nervosa (an-uh-RECK-see-uh nur-VOH-suh), often called anorexia, has an intense fear of gaining weight. Someone with anorexia thinks about food a lot and limits the food she or he eats, even though she or he is too thin. Anorexia is more than just a problem with food. It’s a way of using food or starving oneself to feel more in control of life and to ease tension, anger, and anxiety. Most people with anorexia are female. An anorexic:

A person with anorexia nervosa (an-uh-RECK-see-uh nur-VOH-suh), often called anorexia, has an intense fear of gaining weight. Someone with anorexia thinks about food a lot and limits the food she or he eats, even though she or he is too thin. Anorexia is more than just a problem with food. It’s a way of using food or starving oneself to feel more in control of life and to ease tension, anger, and anxiety. Most people with anorexia are female. An anorexic:

Who becomes anorexic?
While anorexia mostly affects girls and women (85 – 95 percent of anorexics are female), it can also affect boys and men. It was once thought that women of color were shielded from eating disorders by their cultures, which tend to be more accepting of different body sizes. It is not known for sure whether African American, Latina, Asian/Pacific Islander, and American Indian and Alaska Native people develop eating disorders because American culture values thin people. People with different cultural backgrounds may develop eating disorders because it’s hard to adapt to a new culture (a theory called “culture clash”). The stress of trying to live in two different cultures may cause some minorities to develop their eating disorders.
What causes anorexia?
There is no single known cause of anorexia. Eating disorders are real, treatable medical illnesses with causes in both the body and the mind. Some of these things may play a part:
What are signs of anorexia?
Someone with anorexia may look very thin. She or he may use extreme measures to lose weight by:

Someone with anorexia may also have a distorted body image, shown by thinking she or he is fat, wearing baggy clothes, weighing her or himself many times a day, and fearing weight gain.

Anorexia can also cause someone to not act like her or himself. She or he may talk about weight and food all the time, not eat in front of others, be moody or sad, or not want to go out with friends. People with anorexia may also have other psychiatric and physical illnesses, including:

What happens to your body with anorexia?
With anorexia, your body doesn’t get the energy from foods that it needs, so it slows down. Look at the picture below to find out how anorexia affects your health. 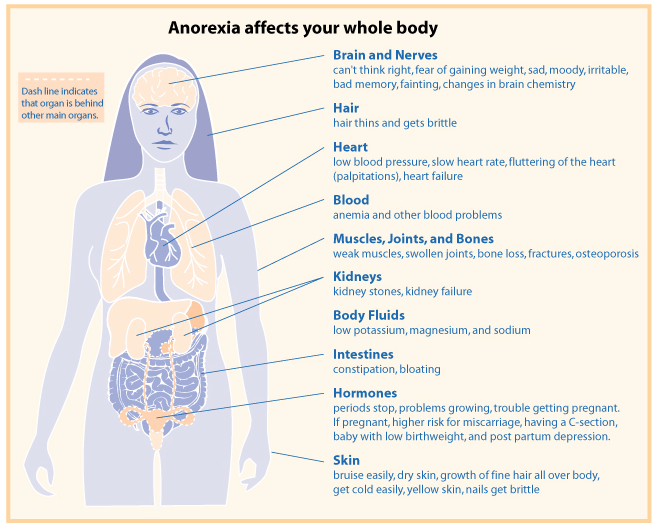 Can someone with anorexia get better?

Yes. Someone with anorexia can get better. A health care team of doctors, nutritionists, and therapists will help the patient get better. They will:

These three steps will prevent “relapse” (relapse means to get sick again, after feeling well for a while).

Some research suggests that the use of medicines — such as antidepressants, antipsychotics, or mood stabilizers — may sometimes work for anorexic patients. It is thought that these medicines help the mood and anxiety symptoms that often co-exist with anorexia. Other recent studies, however, suggest that antidepressants may not stop some patients with anorexia from relapsing. Also, no medicine has shown to work 100 percent of the time during the important first step of restoring a patient to healthy weight. So, it is not clear if and how medications can help anorexic patients get better, but research is still happening.

Some forms of psychotherapy can help make the psychological reasons for anorexia better. Psychotherapy is sometimes known as “talk therapy.” It uses different ways of communicating to change a patient’s thoughts or behavior. This kind of therapy can be useful for treating eating disorders in young patients who have not had anorexia for a long time.

Individual counseling can help someone with anorexia. If the patient is young, counseling may involve the whole family. Support groups may also be a part of treatment. In support groups, patients, and families meet and share what they’ve been through.

Some researchers point out that prescribing medicines and using psychotherapy designed just for anorexic patients works better at treating anorexia than just psychotherapy alone. Whether or not a treatment works, though, depends on the person involved and his or her situation. Unfortunately, no one kind of psychotherapy always works for treating adults with anorexia.

Is it safe for young people to take antidepressants for anorexia?

It may be possible that antidepressants make children, adolescents, and young adults more likely to think about suicide or commit suicide.

The latest information from the FDA — including what drugs are included in this warning and things to look for — can be found on their website at http://www.fda.gov.

What is outpatient care for anorexia treatment and how is it different from inpatient care?

With outpatient care, the patient receives treatment through visits with members of their health care team. Often this means going to a doctor’s office. Outpatients usually live at home.

Some patients may need “partial hospitalization.” This means that the person goes to the hospital during the day for treatment, but sleeps at home at night.

Sometimes, the patient goes to a hospital and stays there for treatment. This is called inpatient care. After leaving the hospital, the patient continues to get help from her health care team and becomes an outpatient.

Can women who had anorexia in the past still get pregnant?
It depends. When a woman has “active anorexia,” meaning she currently has anorexia, she does not get her period and usually does not ovulate. This makes it hard to get pregnant. Women who have recovered from anorexia and are at a healthy weight have a better chance of getting pregnant. If you’re having a hard time getting pregnant, see your doctor.
anorexia hurt a baby when the mother is pregnant?
Yes. Women who have anorexia while they are pregnant are more likely to lose the baby. If a woman with anorexia doesn’t lose the baby, she is more likely to have the baby early, deliver by C-section, deliver a baby with a lower birthweight, and have depression after the baby is born.
What should I do if I think someone I know has anorexia?
If someone you know is showing signs of anorexia, you may be able to help.

Watching your weight? Watch What You Leave On Your Countertop.

Are E-Cigarettes a Safer Alternative for Women?

The Importance of Strength Training for Older Women

[…] Back pain is also more common for women than for men. While the reasons for the disparity are largely unclear, one thing is certain: Strength training can help. […]

I had one out about 6 years ago, now my levels are high again, see a doctor Monday in Houston Tx. I was looking at lab reports from 12 years…

I was prescribed Naproxen by my pain management Dr in Arizona. After prolonged use my kidney has failed. I live in Tn now and the Dr's here have me on…

8 Fruits and Vegetables That Boost Your Mental Health