Pay Attention to Your Period… To Help You Quit Smoking! 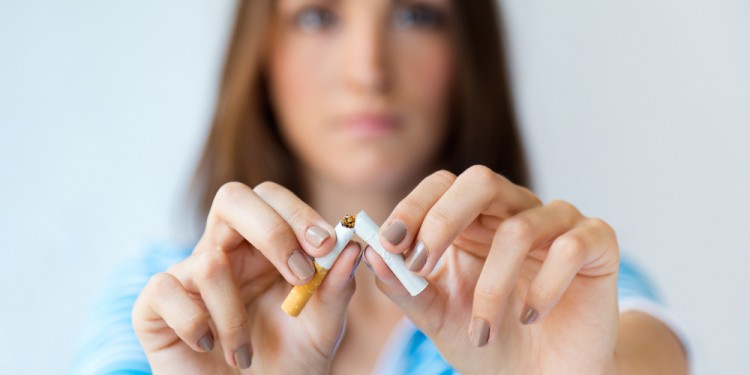 If you’ve been trying to make a New You this New Year and feel like everything, including the cycles of the moon, are thwarting your efforts — you could be right. No, we’re not suggesting that witchcraft is at work against your willpower, but it seems that keeping an eye on your calendar could help you quit at least one of your hardest to kick habits… smoking!

Less than 1 in 10 people manage to actually call it quits — and keep it that way — after ceasing smoking for more than a year, and science suggest that women have a harder time than men (even smoking the same amount). But new research indicates that women may have better luck quitting if they time their efforts to their menstrual cycle.

“Taking the menstrual cycle into consideration could help women stop smoking,” says Adrianna Mendrek, a neuroscientist with the Institut Universitaire en Santé Mentale de Montréal, who has recently published the results of her research on the subject in Psychiatry Journal.

What might this mean for millions of women who haven’t been able to realize that popular New Year’s Resolution? Paying attention to your period this year may give you a better shot at success.

Mendrek initiated the study to answer a simple question… and a harder one. First, the study hoped to prove that there might, in fact, be gender differences in the neuronal circuits linked to craving. Second, it would see if electrocortical changes (electrical activity of the cerebral cortex) linked to nicotine withdrawal change goes hand in hand with hormone variation.

The team recruited 34 smokers — 15 men and 19 women, all of whom were regularly smoking more than 15 cigarettes a day — and took functional magnetic resonance imaging (fMRI) scans of their brains as they were shown neutral and smoking-related pictures known to elicit craving.

The women each underwent the procedure two times, at different points in their menstrual cycle. The first was during the early follicular phase (these are the two weeks from the onset of a women’s period until she ovulates), and the second was during the mid-luteal phase (from the time of ovulation until levels of progesterone start to fall and trigger the beginning of the next cycle).*  The researchers also measured their levels of estrogen and progesterone.

The results were interesting. As to whether gender differences were linked to cravings in the first question, the answer was… not necessarily. But whether brain electrical activity patterns were linked to hormone activity? Yes! Mendrek and her team found that these varied considerably over a female smoker’s menstrual cycle.

According to a brief of the research in Science Daily, uncontrollable urges to smoke are highest at the first phase after your period ends (the follicular phase), due to decreased levels of estrogen and progesterone. Conversely, it’s easier to overcome symptoms of withdrawal after ovulation, or in your mid-luteal stage, and this is believed to be because both estrogen and progesterone levels are higher.

“Our data reveal that incontrollable urges to smoke are stronger at the beginning of the follicular phase that begins after menstruation. Hormonal decreases of estrogen and progesterone possibly deepen the withdrawal syndrome and increase activity of neural circuits associated with craving,” Mendrek explains.

It should be noted that similar research on the topic performed by neuroscientist Jill B. Becker of the University of Michigan at Ann Arbor in 2004 reported that it is our levels of estrogen in particular which may be the culprit.

Though Becker did not set out to with the same two objectives, her results were equally interesting on both topics. Through animal studies, she and her team found it true that female rats actually become addicted to nicotine more quickly and are willing to work harder for the same dose.  And as for a similar second question about hormone activity? Becker’s research found that removing the ovaries of female rats (so they couldn’t produce more estrogen) diminished their tendency to seek out stimulants — and actually giving estrogen to female rats whose ovaries had been removed led them to addiction that much more quickly.

These researchers believe that “estrogen spurs addiction by stimulating the brain’s reward pathways, enhancing the “high” from drugs,” as reported in Scientific American, and that it is the alternative hormone, progesterone, which appears to oppose estrogen’s addictive tendencies.

So, to recap, all current research indicates that your menstrual cycle appears to have a serious affect on nicotine cravings. And if you’re having trouble quitting, it’s totally right to blame it on the hormones. (But keep in mind that other factors do have a strong influence!)

At least in this unfortunate case, the gender gap is closing. Females increasingly have a higher rate of addiction, and it’s been proven (twice!) that our sex hormones are a cause. But… are we the weaker sex?  No!  Because we know that there is a smart way to stop!

Pay attention to the calendar. Try to quit during the second part of your cycle… when both studies showed that progesterone levels are higher. You’ll have an easier time and get better results, because in this case — just like so many other areas in life — timing is everything.

7 Ways to Stop Being a Spectator in Life