Something Old but New to Ease Your Migraine Headaches 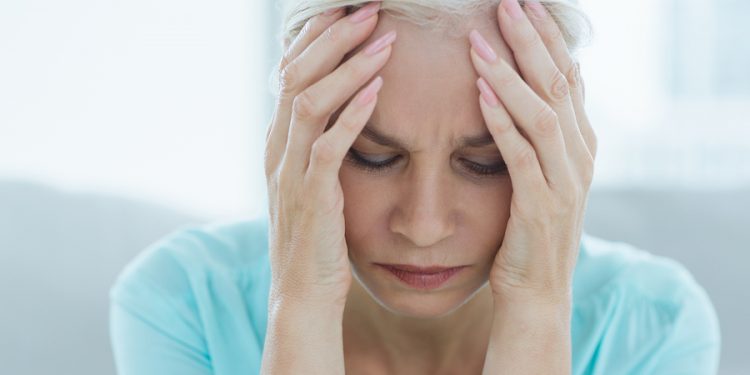 Carolyn groaned and pressed on her right temple. Another migraine, and it was only one o’clock in the afternoon. She had a lot to do, but the pain was so bad it was making her sick to her stomach. She went to the restroom and sat down and closed her eyes. She felt like crying. Wasn’t there anything that could stop these things from messing up her life?

About one in four women will suffer from migraines in their lives—three times as many as men. For many women, it all gets worse as they enter mid-life, usually at the time they start going through perimenopause.

The Migraine Research Foundation says that these awful headaches affect 39 million people in the U.S., and that about 28 million of those are women. In fact, about one in four women will suffer from migraines in their lives—three times as many as men. For many women, it all gets worse as they enter mid-life, usually at the time they start going through perimenopause.

There are medications and injections and alternative treatments like meditation, acupuncture, massage, and biofeedback. Most of these have shown to be effective at least to some extent, but what if they aren’t working for you—or aren’t working well enough?

New research has suggested something else you may not have thought about: hormone therapy. But isn’t that the stuff they said would increase risk of cancer and heart disease?

It turns out the study that came up with those conclusions back in 2002 was flawed. Today’s research has discovered that hormone therapy is not only effective and safe for easing menopausal symptoms, it may be your best option for relieving migraine pain and frequency, too.

What is the Migraine-Estrogen Connection?

Why would hormones help relieve migraines? Well, if you’ve ever had a migraine attached to your menstrual period, it probably makes sense.

A drop in estrogen levels is what precipitates your period, and often what causes a migraine as well. In a 2017 study, researchers stated that migraines are affected by fluctuating estrogen levels, “with evidence to support estrogen ‘withdrawal’ as a trigger of menstrual attacks of migraine without aura, while high estrogen levels can trigger migraine aura.”

According to the National Migraine Centre, migraines tend to get worse in the years leading up to menopause, “with attacks occurring more frequently and sometimes also lasting longer.” Many women notice more of a link with their periods, particularly when they become more erratic.

In a 2016 study, researchers actually found that women who suffered from migraines experienced even more severe changes in hormone levels. According to lead author Jelena Pavlovic, these women “have a different hormone profile to women without a history of migraine—specifically, they have a more rapid decline in estrogen in the late luteal phase of the menstrual cycle.”

Hormones play a role in menopausal migraines, too. According to the National Migraine Centre, migraines tend to get worse in the years leading up to menopause, “with attacks occurring more frequently and sometimes also lasting longer.” Many women notice more of a link with their periods, particularly when they become more erratic.

The Migraine Trust states that menopause makes migraines worse for up to 45 percent of women. The main reason for this connection is again, the dropping levels of estrogen that occur during menopause. Even during perimenopause, hormone levels fluctuate more than usual, and women may find that they’re dealing with an increase in migraines. There is some evidence that women who have more trouble with hot flashes and night sweats are also more likely to suffer from more frequent and severe migraine headaches.

In fact, the migraine-hormone connection is so strong that researchers in a 2012 study went so far as to say that this is likely the reason that migraines affect so many more women than men. “Migraine is predominantly a female disorder,” they wrote, adding that menstruation and menopause both influence migraine occurrence.

Hormones aren’t the “only” trigger for migraines, of course. Stress, lack of sleep, and certain foods can bring them on too, but when we’re looking at all the migraines that occur in women, we see that hormones are often to blame.

How can HT help?

Considering that migraines are often related to hormonal fluctuations, and that they can get worse at mid-life when women enter perimenopause, it makes sense that hormone replacement therapy would be an effective treatment.

And that’s what researchers have found. In 2014, they reported that minimizing the decline in estrogen by using hormones “may decrease both headache frequency and aura.”

In an earlier 2012 study, researchers reported that hormonal contraceptives improved migraines except during the week of “blank” pills, when estrogen levels are allowed to drop. They recommended supplementing some estrogen during that period, as extended application was associated with an overall reduction in migraine severity and frequency.

A 2017 study also confirmed that for women with hot flashes and migraines that worsen during perimenopause, estrogen therapy “often improves both symptoms.” They suggested transdermal hormone regimens to avoid triggering the estrogen-withdrawal headaches.

There has been some concern, however, that hormone therapy in women who experience migraines with aura may increase risk of stroke. In 2016, researchers found that women who suffered from worsening headaches while taking hormones were at an increased risk for stroke. Other studies have suggested that migraines, alone, can increase risk of stroke, so the concern is that it’s best not to add to that risk by putting hormone therapy into the mix.

And then there’s the risk of breast cancer and heart disease. What about those?

What About the Risks of HT?

Back in 2002, the Women’s Health Initiative (WIH) study reported that women taking hormone replacement therapy to treat menopausal symptoms were more likely to be diagnosed with heart disease or breast cancer. The results frightened women, and most doctors stopped recommending HRT.

It’s been 15 years since then, and now we know that the 2002 study was flawed. Researchers have pointed out a number of issues with the study and its conclusions, and even some of the original investigators have stated that the results were being used inappropriately.

In one recent examination of that study, researchers stated that the data used were biased and invalid, that the results were not confirmed in subsequent studies, and that because many of the participants didn’t stick with their treatments, the results were skewed.

You can read more about how the perception of HRT has changed between 2002 and now on our previous article, “The Study was Flawed: Why Women Should Rethink Hormone Therapy.” It may help to put your mind at ease if you’re considering hormones for migraines.

But what about the stroke risk? A recent 2017 study has shed more light on that, as well. They analyzed the initial participants from the WIH study and found that women with migraines were more likely to suffer from night sweats and hot flashes, too, and that there was no increased risk of cardiovascular events (like strokes) in those using hormone therapy.

“Since migraines affect one in every four women,” said lead author Dr. Jelena Pavlovic, “and women with migraines are often advised to avoid hormone therapy, these findings may have significant public health implications.”

In another recent study specifically on migraines with aura, researchers reported that stroke risk is “not increased” with today’s more modern low-dose hormone therapies, and that continuous ultra low-dose formulations may even reduce aura frequency, “therapy potentially decreasing stroke risk.”

It seems that the concern about the use of hormones in women suffering from migraines with aura was originally based on data from the 1960s and 1970s, when oral contraceptives, in particular, contained much higher doses of estrogen. Today’s hormone products contain the lowest dose possible to be effective, and are much lower than they were decades ago.

How Women May Use Hormones to Treat Migraines

If you’re a woman who typically experiences migraines:

talk to your doctor about your options.

Younger women (under the age of 60) who are healthy and free of cardiovascular disease are good candidates for hormonal treatment. There are now birth control pill regimens that allow you to actually skip that week of blanks, so you don’t have the estrogen withdrawal, or that provide you with just a tiny bit of estrogen during that week so you fall off more gradually.

Standard HRT therapy for menopausal symptoms are good options for women who are suffering from night sweats, hot flashes, mood swings, as well as migraines—the treatment can help reduce all of these, helping you to feel substantially better.

You can also talk to your doctor about various types of hormones, such as those delivered via gels, patches, or in other ways that allow you to use the lowest dose possible. Ask about bio-identical hormones, too, as there is some evidence that synthetic options may be more likely to aggravate headaches.

Then, once you have your treatment, track your progress. If you have fewer headaches, you can feel good about continuing the therapy. If your headaches stay the same or increase after about 8-12 weeks, however, talk to your doctor again. There may be other options that will work better for you.

Get the Facts About Migraines

Why Women Get More Migraines, and 10 Possible Solutions

7 Reasons Women Need to Get Their Vitamin D Levels Checked…Now!