Do Women Really Need to Cut Back on Sugar? 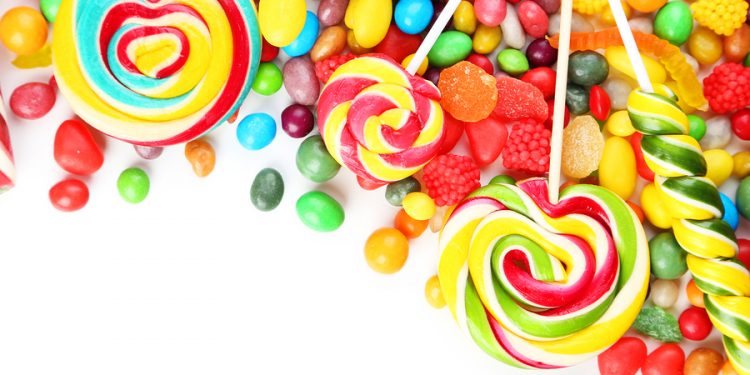 American actress Alicia Coppola, known for her work in National Treasure: Book of Secrets and We Are Your Friends, has this to say about sugar:

“I like sugar, be it candy, this season’s pumpkin chocolate chip bars, or wine. Sugar is bad for me. It just sits on my tummy, causing my middle child Esme to ask if we are having a fourth baby. Rude!”

Her words seem to echo how a lot of women feel about sugar: we love it, but we know it’s not good for us. Most of us, like Alicia, are concerned about how it can pad our waistlines, but recent studies and media reports have also linked sugar consumption with mood swings, diabetes, heart disease, and even cancer.

Some have even gone so far as to label sugar as “toxic” to the body and mind.

Is that true? Is sugar really that bad, or have the reports been overblown?

It makes sense that we like sweet things, because they are instinctively seen as reliable fuel sources. But we consume far more sugar today than we used to, which is having negative effects on our health.

We Depend on Sugar to Live

In a way, our bodies depend on sugar to live.

A form of sugar called glucose, that is.

All of the carbohydrates we consume, including sugary treats, are turned into glucose, a form of sugar, in the body. If the body needs more energy, it can also turn protein into glucose, but it usually uses proteins for other purposes. Fats can also be used for energy. The body breaks them down into fatty acids, which are used to help produce hormones and build cell walls, among other things.

So in a way, it makes sense that we like sweet things, because they are instinctively seen as reliable fuel sources. But we consume far more sugar today than we used to, which is having negative effects on our health.

How Much Sugar Are We Eating Today?

According to research presented at The Obesity Society Annual Meeting in 2014, American adults consume 30 percent more added sugar now than they did 30 years ago. During the same time period, children increased consumption by about 20 percent.

All that sugar is quickly converted to energy, and most of that energy we don’t need. That results in weight gain.

American adults consume 30 percent more added sugar now than they did 30 years ago. During the same time period, children increased consumption by about 20 percent.

The American Heart Association (AHA) recommends no more than 6 teaspoons a day of added sugars for women, which amounts to about 100 calories. Why so limited? The AHA says the added sugars contribute no nutrients, but add calories that can tack on the pounds, increasing risk of heart disease.

The Centers for Science in the Public Interest (CSPI) notes that for most women, it’s easy to exceed that 6 teaspoons. A 20-ounce Coke, for example, contains 15 teaspoons.

The CSPI states that the actual added sugars consumed by the average American per day is 23 teaspoons. That adds up to 385 calories, or you can think about it this way—it takes 1.5 hours of walking or about 45 minutes of jogging to work that off. 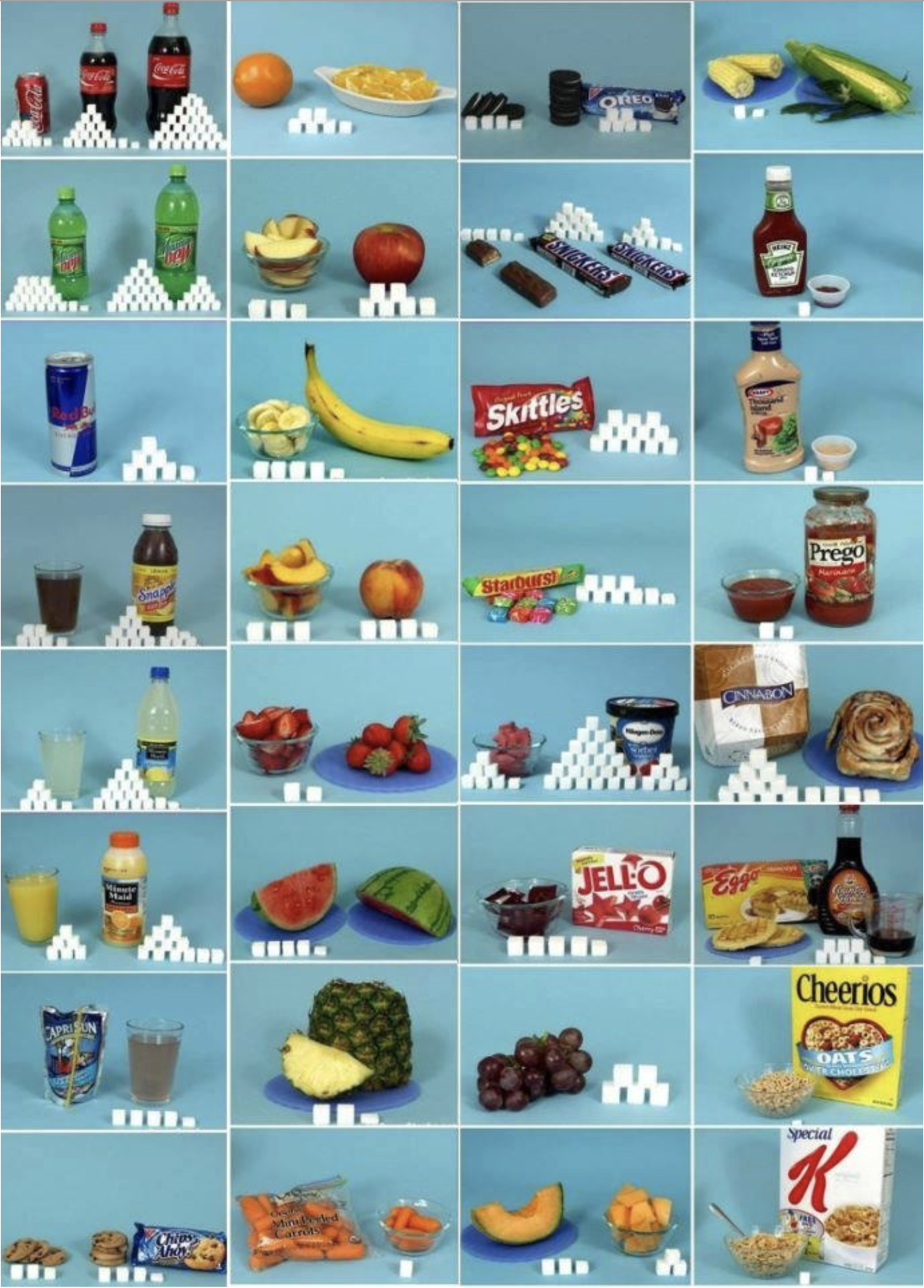 A sugar cube represents each teaspoon of sugar found in these foods. Photo credit: sugarstacks.com

What are Added Sugars?

“Added sugars” include all those found in treats like cookies and donuts, but also those found in seemingly innocent foods like yogurt, ketchup, soup, and bread. It does not include naturally occurring sugars, such as those that occur in fruits, which are considered healthier because they’re combined with other nutrients like fiber.

Keep track of how much you’re actually consuming every day from these items and you may be surprised. (Organic foods often have less.) Look for ingredients like the following:

Simple Carbohydrates are Also Part of the Problem

It’s not just straight sugar that’s causing sugar-related health problems, though. There is another culprit that tends to spike blood sugar levels, because they are broken down so quickly in the body to glucose.

Diets that are regularly high in simple carbs are thought to tax the body’s sugar-processing system, resulting in repeated blood sugar spikes, and increasing risk of dementia, diabetes, heart disease, and even cancer.

These are simple carbohydrates, which include all those sugary treats we’ve been talking about, like cakes and cookies, but also white flour, white rice, white pasta, and white potatoes. (Think French fries, potato chips, and manicotti.)

These foods are composed of sugars with simple chemical structures that are easily broken down and converted to glucose in the body, flooding the bloodstream. The body reacts by producing more insulin to process all that glucose.

Complex carbohydrates, on the other hand, which have more complex chemical structures, are more difficult and time-consuming to break down, and thus help keep blood sugar levels steady. These foods typically contain fiber and take longer to digest, which is easier on the body as a whole.

The Dangers of Too Much Sugar

Why has sugar gotten such a bad rap lately?

There are several reasons, some of which we’ve already covered. First, we’re eating a lot more of it then we used to. Second, we’re suffering a national obesity epidemic, which is ruining our health. Our excess sugar consumption is believed to be partially, if not wholly, to blame for our expanding waistlines.

Even when we want to cut back it can be difficult, because our condiments and yogurts and cereals and breads, among other items, all have sugar added during processing.

Thirdly, we’re suffering more diseases that are partially related to excess sugar consumption. The Centers for Disease Control and Prevention (CDC) states that between 1980 and 2014, for example, the number of Americans diagnosed with diabetes increased fourfold.

Fourth, American foods are filled with sugar. Even when we want to cut back it can be difficult, because our condiments and yogurts and cereals and breads, among other items, all have sugar added during processing.

Fifth, research shows that all that sugar is having a negative effect. Studies have linked chronically high insulin levels (because of excess sugar consumption) to higher levels of triglycerides in the blood, lower levels of HDL “good” cholesterol, obesity (which increases risk for diabetes and heart disease), dental problems (loss of enamel and cavities), reduced immunity, and even some cancers.

Sugar can contribute to systemic inflammation, leading to joint pain and acne breakouts. And a 2014 study found a significant relationship between added sugar consumption and increased risk for death from cardiovascular disease.

A 2002 study found a disturbing link between excessive sugar consumption and brain health, resulting in reduced learning performance, while other similar studies have linked it with depression and dementia. Sugar can contribute to systemic inflammation, leading to joint pain and acne breakouts. And a 2014 study found a significant relationship between added sugar consumption and increased risk for death from cardiovascular disease.

All this research has given us reason to want to cut back. Unfortunately, for many women, that’s tough to do.

Have you ever said, “I’m so addicted to brownies!” Or something similar?

We say these things in passing, not thinking much of it, but turns out those types of statements may be more true than we imagined.

Recent studies have found that sugar affects the brain in much the same way as additive drugs like heroine and cocaine. In 2008, for instance, researchers noted that sugar releases opioids and dopamine in the brain, and that under certain circumstances, animal participants became dependent on it. 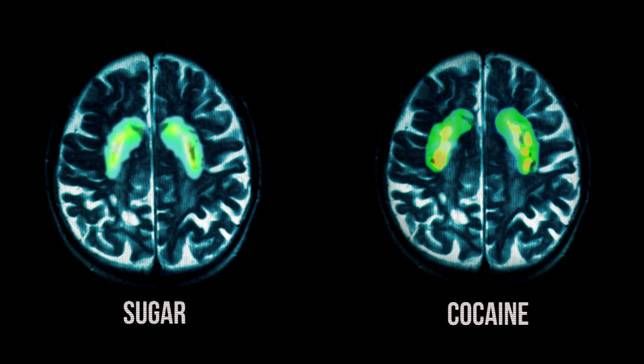 Other studies followed, until it has become accepted that excessive sugar intake can lead to addiction. Much like other addictions—where people need more and more to create the same “high”—a sugar addiction is much the same. After awhile, the body becomes sensitive to it, and craves more to get the same level of award.

In a more recent 2016 study, research from Australia found that drugs used to treat nicotine addiction could also be used to treat sugar addiction in animals—a stunning finding that may lead to treatments in the future.

What’s Causing All Those Sugar Cravings?

You’re doing well for about three days, and then you have one day when things just don’t go well. You’re rushing home in the afternoon when you pass the bakery shop. Much as you want to, you just can’t resist. One donut, brownie, and cupcake later, you wonder what happened. You didn’t want to be here again!

Turns out that the body and mind see sugar as a solution to many problems, and when those problems come up, both will ask for sugar so insistently that all but the most hardened of will powers will find themselves caving in.

What problems are we talking about? Here are just a few:

How to Beat Sugar Cravings and Reduce Overall Consumption

It would take a whole new article to dive into how to reduce your cravings, but for now, consider the following tips:

For more information on how to beat your sugar cravings, see our other posts on the topic:

Putting a Stop to Sugar Addiction

How to Beat Your Brain’s Compulsion to Crave Unhealthy Foods

“Sugar: Too Much of a Sweet Thing,” Center for Science in the Public Interest, https://cspinet.org/new/pdf/combined_infographic.pdf.

“The Truth About Sugar,” WebMD, http://www.webmd.com/food-recipes/health-effects-of-sugar?page=2.

“Do you have days when you can’t stop eating? Blame it on lack of sleep,” Silent Night, August 10, 2015, http://www.silentnight.co.uk/sleep-matters/sleep-news/2015/october/do-you-have-days-when-you-cant-stop-eating-blame-it-on-lack-of-sleep/.

Are Bagged Greens the Secret to Getting Americans to Eat Their Vegetables?